Aptamers and SELEX: Tools for the Development of Transformative Molecular Recognition Technology

Aptamers and SELEX: Tools for the Development of Transformative Molecular Recognition Technology

Abstract | Aptamers, single stranded nucleic acid-based molecular recognition elements, are generated through an in vitro evolution process called SELEX. The selection of aptamers with optimal specificity and high affinity remains a challenge, leading to the recent emergence of elegant new approaches and tools for SELEX. In this commentary, we discuss recent advancements in the selection of aptamers.

Aptamers are oligonucleotides that can be selected or evolved to bind a diverse set of targets ranging from small molecules to whole cells. These functional nucleic acids were first isolated in 1990 by two separate groups using nucleic acid in vitro selection. Tuerk and Gold used the term Systematic Evolution of Ligands by Exponential enrichment (SELEX) for their process of selecting RNA ligands against T4 DNA polymerase (Tuerk and Gold, 1990) and Ellington and Szostak selected RNA ligands, for which they coined the term aptamers, against various organic dyes (Ellington and Szostak, 1990). Interestingly, natural aptamers, which exist as the recognition component of genetic control elements known as riboswitches, were discovered a decade later in bacteria (Gelfand, et al, 1999; Mironov, et al., 2002; Nahvi, et al., 2002; Winkler, et al., 2002a,b). Several examples of natural aptamers have since been revealed across all domains of life (Barrick and Breaker, 2007).

In the past two and a half decades, research has highlighted aptamers as versatile molecular recognition elements possessing many unique properties, drawing direct comparison to widely implemented antibody technology. While aptamers compare well with antibodies in terms of affinity and specificity, there are several technical considerations that can favor aptamer technology. For example, owing to the ease of solid-phase DNA synthesis, the preparation of aptamers is readily scalable and relatively inexpensive, and can allow for the rational and homogeneous incorporation of a wide variety of chemical modifications with little effect on performance, robustness, and stability (Wang, et al., 2011). Furthermore, owing to their small size and nucleic acid composition, aptamers have been easily coupled to other functional nucleic acids of interest including siRNA (Chu, et al., 2006), miRNA and ribozymes (Chang, et al., 2012).

The recent expiration of the original SELEX patents has led to a surge in both industrial and academic interest. The number of publications and patents reporting new aptamers, demonstrating new platforms for developing and analyzing aptamers, and most commonly, describing novel proof-of-concept aptamer applications, have grown considerably in the past few years (see figure 1). Other major industrial advances in the field of biotechnology, mainly the development of affordable, high-throughput DNA synthesis and sequencing, place aptamer technology in a unique position to potentially transform a broad range of applications addressing challenges in the environment and medicine. This interest and success in aptamer technology both at the academic and industrial level suggest that the time is ripe for the launch of a journal dedicated to this expanding field with the overall goal of facilitating their broader implementation in practical therapeutics and diagnostics. 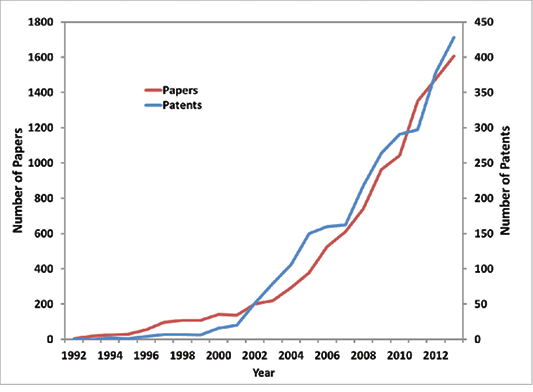 Figure 1: Results from the Scifinder database (1992-2013) indicating the number of papers and patents reporting on oligonucleotide aptamers.

The availability of natural aptamers is limited (Dixon, et al., 2010); therefore, our ability to select aptamers through in vitro techniques such as SELEX is necessary to develop these ligands to novel targets. The SELEX process begins with a random oligonucleotide library. These sequences are exposed to the molecule of interest and those with an affinity for the target are separated from non-binding sequences. Polymerase chain reaction (PCR) amplification of those binders yields an enriched pool for subsequent, more stringent, selection rounds. After several rounds, this pool is sequenced and characterized to find aptamers with the desired properties. During any in vitro selection, one must consider and balance several variables including: initial library construction, type of aptamer (e.g. DNA, RNA, modified nucleic acid), selection environment (e.g. pH, buffering agent, temperature, ionic strength), selection method (e.g. immobilization of target, partitioning efficiency, stringency), method for monitoring enrichment and evaluating success, time dedicated to complete a successful selection, and cost. Despite increased interest in the process, SELEX is time-consuming, often results in failure, or produces poor aptamers (Gold, et al., 2010). As a result, the accessibility of aptamers for novel, practical targets is still limited. Case in point, only a handful of aptamers have moved onto clinical applications (Sundaram, et al., 2013)) and most new proof-of-concept sensors make use of the same subset of aptamers (e.g. thrombin, ATP, theophylline) (Mascini, et al., 2012).

To date, there have been few systematic studies available to guide the decisions needed to rationally design new SELEX experiments. One notable study revealed that low magnesium concentrations (0.5 mM) facilitated effective isolation of the highest affinity aptamers (Carothers, et al., 2010). Interestingly, most aptamer selections are performed at physiologically relevant pH (pH 7.4) but use non-physiological (greater than 0.5 mM Mg) concentrations of magnesium. This study supports the hypothesis that standard selection conditions may be inherently erroneous and should be tuned to improve selection success. As another example, many groups have explored the importance of random region length for in vitro selection experiments. Most recently, the Silverman group established that different lengths may be better-suited for particular functions (Velez, et al., 2012). Therefore, to improve the likelihood of selecting for the desired function, several variable lengths could be employed in the selection. These particular studies highlight the need for more thorough experimentation of SELEX criteria and the correlation with SELEX success. Indeed, even mathematical analysis and computational modelling of the SELEX process may serve as tools for providing insights into the experimental design of SELEX experiments. For example, a recent mathematical modelling report suggested that negative selection rounds should be delayed until later stages of the SELEX process and that the ratio of positive to negative selection rounds should be greater than one (Seo, et al., 2014).

Many other small-scale studies have altered SELEX criteria with the aim to improve a particular selection; however, a more thorough analysis is required to make conclusions applicable to the field as a whole. For example, a recent SELEX paper using Immobilized Metal Affinity Chromatography (IMAC) resins for the immobilization of a peptide target determined that resin composition (agarose vs. polystyrene) and metal ion (Co(II), Cu(II), Ni(II), Zn(II)) can have a dramatic effect on selection efficiency (enrichment and specificity) (Kowalska, et al., 2014). Furthermore, since it is suggested that library design affects the selection outcome, we and others have demonstrated that highly structured scaffolds for aptamer libraries can result in enriched aptamer affinity (Luo, et al., 2010; Davis and Szostak, 2002). However, large scale studies would be required to confirm that such designs should be systematically included in new selections. This is a prime example of the overall state of the aptamer selection field: a new method or strategy is developed and validated via a proof-of-concept selection; however, the new approach is then rarely implemented by other groups. As a result, there is little-to-no universally accepted or validated criteria for aptamer selections, and most selection strategies and conditions are chosen in-house and vary from group to group.

While many variations to the SELEX method have been reported since its invention (McKeague and Derosa, 2012), a majority of experiments rely on the same techniques described in those initial works. Nevertheless, there has been no shortage of innovative new methods and tools for aptamer selections (in particular for protein targets) with the aim to either improve the throughput or the partitioning efficiency. For example, the Soh group has recently reported a new approach coined “particle display” (PD) which moves the random DNA library from solution onto the surface of aptamer particles that can be sorted based on relative affinity in a high throughput manner using fluorescence activated cell sorting (FACS). The approach yielded high affinity aptamers after only four rounds (one conventional SELEX followed by three PD rounds) for four protein targets, including two targets which had proven intractable for previous aptamer selections. The approach is very promising for large biomolecules, but as it requires fluorophore labelling of the target it may be somewhat more difficult to apply to small molecules without affecting aptamer/target interactions (Wang, et al., 2014). Along with new SELEX approaches, there exists a variety of tools available to monitor library enrichment and selection success during the SELEX process that are gaining more widespread use, including real time PCR and next generation sequencing (NGS) (Vanbrabant, et al., 2014; Mencin, et al., 2014). These techniques provide valuable information on the progress of selection, but still require careful analysis and scrutiny; for example, it has been shown that the most abundant clones that emerge from the NGS of the final selection round are not necessarily those with the best affinity, due to PCR bias and other confounding factors (Schutze, et al., 2011).

Looking to the Future

Despite new selection methods, tools, and promising aptamer application platforms, antibodies remain the most widely used molecular recognition agent in industry, particular for clinical applications. There still remain two major barriers that prevent aptamers from becoming the standard in molecular recognition, (1) the availability of thoroughly reported, reliable, and well-validated candidates that can be directly integrated into desirable applications (2) the ability to consistently and rationally generate successful aptamers, particularly at high-throughput.

In 2009, Cho, Lee and Ellington proposed a set of standards for aptamer publications (Cho, et al., 2009). Since that time, there has been a noticeable improvement in reporting new aptamers, in particular, researchers now often include the aptamer sequence and determine the dissociation constant (KD) as a measure of aptamer quality. However, this minimal characterization and lack of functional validation is often insufficient information for researchers to incorporate the aptamer candidates into an application of interest without substantial modification and additional testing. Furthermore, aptamer sequence and KD are not easily searchable, leaving potentially excellent aptamer candidates unknown to other research groups and companies, and hindering the broader use of aptamers in practical applications. We suggest that aptamers are thoroughly validated using established methods that can measure both affinity and kinetics (Chang, et al., 2014). The binding conditions used in the selection as well as the aptamer characterization should be included in the publication. Furthermore, these aptamer properties should be catalogued using a common, open-access, searchable, and scalable database (Cruz-Toledo, et al., 2012). Similar to proteins and antibodies, which are catalogued in databases such at the protein databank, a resource for aptamers would facilitate the accessibility to quality aptamers beyond the “proof of concept” sequences. This would also facilitate the documentation of cross-laboratory validation and application of aptamers, reassuring researchers in the field to implement well-characterized candidates into their novel technologies.

The advances in bioinformatics, high-throughput sequencing, and the vast number of SELEX experiments performed over the last two and a half decades provide us with an excellent opportunity to mine data to find trends and criteria supporting smart aptamer selection. While we encourage continued focus on novel tools for selection and aptamer applications, there is also a need to understand and improve aptamer selection and binding while providing researchers with a platform to report on, search and validate this information. Moreover, the field would benefit from a renewed focus on one of the major advantages held by aptamers over antibodies: the ability to tune SELEX conditions to yield a ‘purpose-based’ selection whereby the conditions of the eventual application are considered from the outset. One very successful example of this is the “Structure-Switching” SELEX designed for the development of turn-on fluorescence-based aptasensing (Nutiu and Li, 2005). Also worth considering would be the expansion of aptamer technology outside the realm typically dominated by antibody technology, for example, selection of aptamers under more “non-physiological” conditions. While this possibility is often touted as an advantage to aptamers, it is underexplored. For all these reasons, we welcome the introduction of this journal as an opportunity for a more detailed understanding of the principles that underscore successful aptamer selection and implementation.